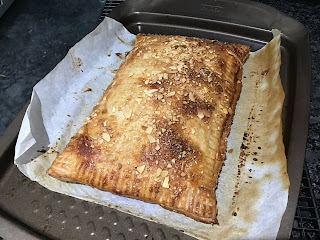 We’ve never been keen on complex recipes. Always happy to think of a quick fix/easy option. This is a dessert that is so simple, yet tasty. Looks good and takes very little effort... just our sort of thing. 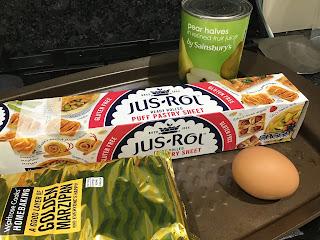 What we needed for this was a pack of ready rolled puff pastry  (we used Jus-Rol Gluten Free), tin of pears (we used pears halves  in fruit juice) some grated marzipan, egg was, and a few toasted sliced almonds. 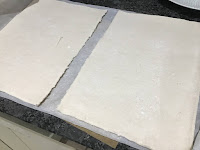 Having allowed the pastry to reach room temperature (this reduces risk of the pastry splitting when unrolling), it was split into two. Folding the pastry in half long ways, it was cut using a palette knife. 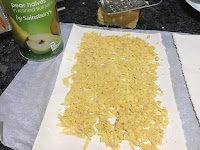 Construction began. We grated a small amount of marzipan (or almond paste) over one half of the pastry, then added drained pear halves to cover it. 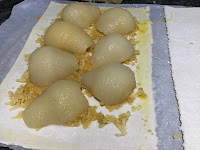 To make sure the pastry sealed, egg wash was applied to the edges of the pastry and the remaining pastry was laid over the pear covered base. We gently stretched the top layer of pastry to encase the pears, and used a fork to crimp the pastry together. 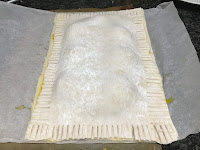 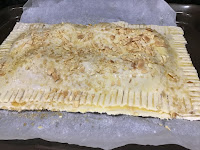 The top of the parcel was egg washed, and some toasted flaked almonds were sprinkled over.

The pastry parcel was put onto a nonstick baking tray (still on the paper it was unrolled on) and placed in a pre heated 200C fan oven for 10 minutes.  It was checked and turned and cooked for a further 3 minutes until browned. 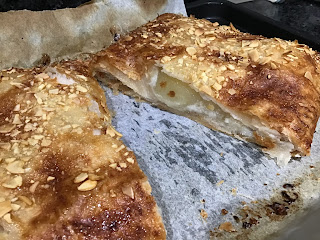 We served it with pouring cream, but ice cream or clotted cream would work well too.
Posted by L and J at 12:10 No comments: 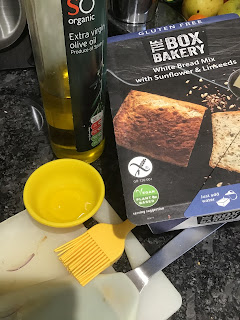 We saw on twitter that the Box Bakery were selling #GlutenFree mixed packs containing bread and chocolate cake. Always on the look out for simple bakes, particularly bread, we placed an order. It was speedily delivered and the contents seemed tempting... and more importantly, required just warm water to be added! 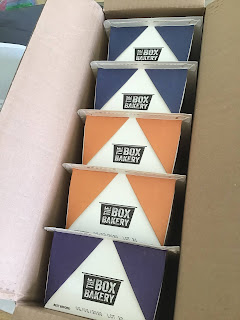 Looking at the bread options, we decided to try the white bread mix. We thought that it would be nice tweaked with the addition of cheese and onion. 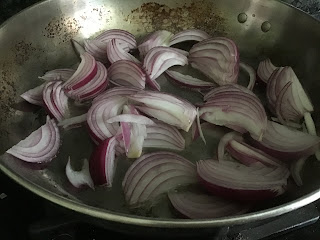 To make the onion, a medium red onion was sliced thinly and fried in oil until it was starting to look transparent. It was then taken off the heat and left to cool. The cheese (we used Red Fox vintage red leicester) was grated. 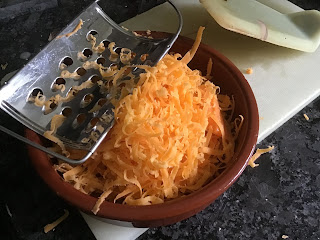 The instructions on the Box Bakery packaging were then followed. 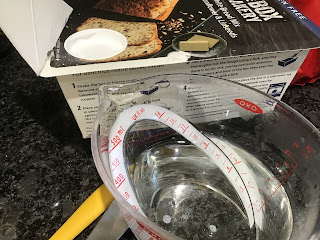 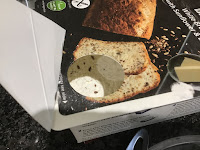 Opening the box on the corner, the lukewarm water was added. Having shaken the box as instructed, the lid was carefully peeled off and a fork was used to ensure the mix was fully combined. 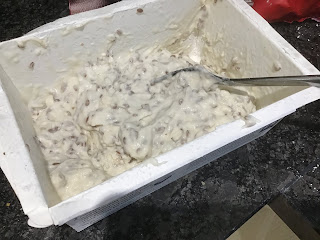 At this point the onion and cheese was stirred into the dough and mixed through. The top of the loaf was brushed with olive oil. 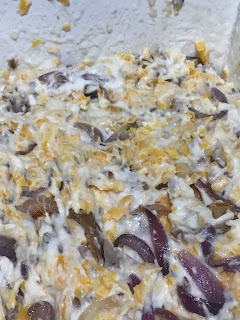 Following the instructions, the loaf was placed, in its box, in a cold oven with the temperature set for 50C, then cooking for 25minutes (a little longer than stated in the instructions to allow for the additional ingredients included in the loaf) 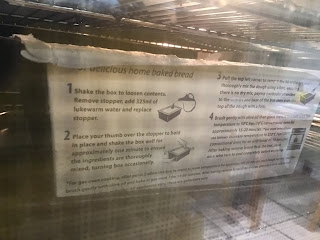 The oven temperature was then increased to 210C (fan) and the loaf was baked for 50 minutes.  It was checked after this time and the oven was turned off, leaving the loaf in the hot oven for a further 10 minutes. 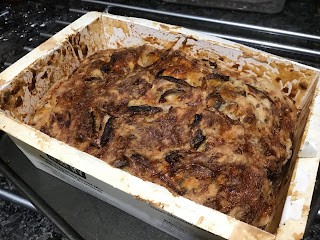 Taking the loaf out of the oven, it was left to cool. 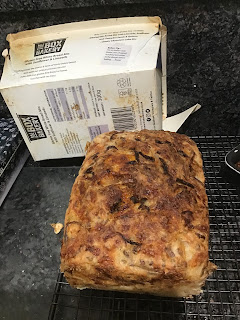 Finally, it was removed from the box and sliced... 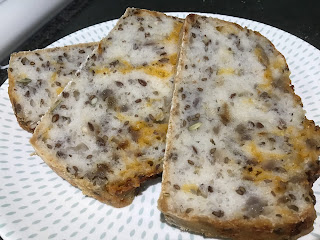 We thoroughly enjoyed the bread and it was very good toasted as well. The concept of Bake in the Box is very good for easy, cupboard options...and also for those who aren’t #GlutenFree but want to offer pals who are a home baked and SAFE bread! I will be making sure my mum has a box for our next trip to see her 😉
Posted by L and J at 10:22 No comments: 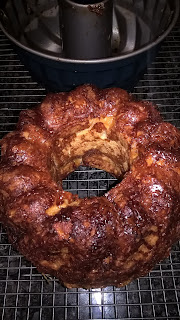 The other week (or was it month?) I spotted some Helen's bread mix being sold at a very reduced price in Sainsbury's.  We do not make #glutenfree bread from scratch, we either make a savoury soda bread or use Grass Roots Bakery's bread mix to make rolls.  But the bargain price caught my eye... so I bought the two remaining packs for pence.

Next up came two challenges... remember to use the mixes and then figure out something J would actually eat!  Thinking there was a better chance of getting something to work that was a savoury bread, I decided a cheese and onion bread would be good... but J didn't like the idea of onion and came up with the idea of marmite OR mango chutney as the additional ingredient.  I thought we'd use the bundt tin for the bread baking to ensure a speedier and more even bake.

Melting some butter, with a scant teaspoon of marmite, the inside of the bundt tin was brushed with
the mix before having grated mature cheddar cheese sprinkled over.

The mix was made up according to the VERY simple instructions on the pack - the sandwich bread mix only requires 300ml hand hot water and a tablespoon of oil to be added.  Following the "by hand" method on the pack, the wet and dry ingredients were combined using a metal spoon... and a porridge like
batter/dough was the result.

Dollops of the mix were placed around the base of the tin, then a bit of the butter/marmite and a little grated cheese was added.  The

remaining dough was then added to the tin.

As directed, the tin was placed in hand hot water for 40 minutes. 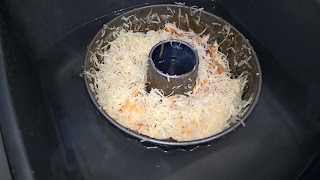 Once the dough had risen, the tin was placed on a baking sheet in a pre-heated 200ºC oven and baked for 25minutes when it was checked for baking.

When the loaf was baked through, it was removed from the oven and allowed to cool for ten minutes before turning out onto a wire rack.

Slicing the loaf, you can see the texture and the included cheese and butter mix.  It's a real succes here! 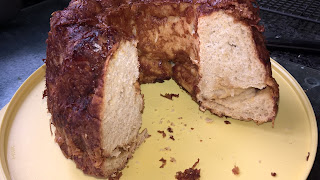 L and J
A mum and her son exploring life and learning together... A blog about this and that and other things that work (or don't) when living life. Ideas, techniques, equipment and strategies that get us through the day!